For a comprehensive understanding of emigration and immigration records, study the article Germany Emigration and Immigration.
The author of the following website lists emigrants from the middle of the 1800s, however, places of origin are not provided.

On Jan 21, 1839 a group of Saxon emigrants (700) ARRIVED from Bremen on the ship Olbers going to New Orleans 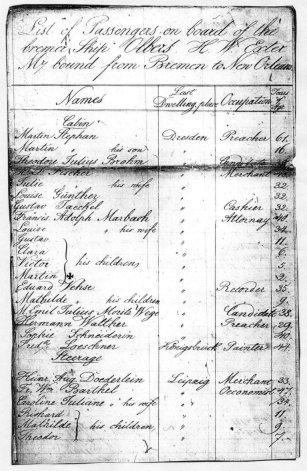 This group belonged to the religion of Altlutheraner. The Olbers was only one of 4 ships. They settled [temporarily] in St. Louis, Missouri before moving to East Perry County, Missouri - around the town of Altenburg, MO. This emigration is documented in "Zion on the Mississippi" by Walter O. Forster, 1953. The Lutheran Heritage Center & Museum in Altenburg has a wonderful research center called "Zion Roots" - to help you extend your research back to Germany. The "Zion Roots" icon on the website explains the research center and its resources.

Reformed refugees in the Prussian Duchy of Magdeburg[edit | edit source]

The Counter Reformation brought no few problems to non-Catholics. Although edicts and guarantees were issued that religious minorities could co-exist with their neighbors of different creeds, some rulers did not uphold their promises. This was the case with the Reformed parishes of Grönbach and Herbishofen in Swabia.

The Catholics decided they did no longer want to share their burial space with people not of their faith. Neither did it help the Reformed congregations to have to submit themselves to a Catholic sovereign. Rupert v. Bodman knew how to keep his Reformed subjects down so that they could no longer prosper economically. They had to suffer undue punishments and often lost their properties. The Reformed people of Grönbach were not allowed to divide their farms between their children, only the first-born sons could be the proper heir. No Reformed person was allowed to buy property from a Catholic. A Reformed, however, was allowed to sell his property to a Catholic. Finally, only so many marriages were to take place as houses exist among the Reformed. The harshness of the regulations is especially evident since Reformed families had on average between five to ten children. Even orders from higher authorities could not bring about any changes to the deplorable situation.

The Reformed congregations countered with leaving the area. Groups of young people followed the invitation of the Elector of Brandenburg who appointed them to take residence in Burg by Magdeburg in 1697.

In Kempten, in Swabia, the emigrants had to obtain Freibriefe (release from serfdom) and agree that in case of inheritance problems the court of Kempten was responsible. Many emigrants did not bother to get such a certificate. Therefore, many more people than registered may have left the area to settle in Burg.
Where in the Duchy of Magdeburg the refugee settlements were established, can be retrieved in an article, entitled Reformierte Glaubensflüchtlinge aus Schwaben im ehemals preußischen Herzogtum Magdeburg by Horst Friedrich Nagel found in Mitteldeutsche Familienkunde, Band IXm Jahrgang 29, Heft 2, pages 58-69. Attached is also a list of names with dates and places.